You will often hear enthusiasts recommend the Rolex Air King for people who are just starting to get into the giant Swiss brand. Indeed, the model in question is known for being the entry-level model. In other words, it is the cheapest watch in the brand’s lineup. And while it is cheaper than the average Rollie, it still packs the same punch that the others have.

Read on to find out why the Rolex Air King is more than just Rolex’s basic watch.

History of the Rolex Air King

Despite being unpopular, the Rolex Air King is one of the Big Crown’s longest-running models. Yes, you read that right. It was released in 1945, making it even older than the beloved Rolex GMT. And as the story goes, it was produced immediately after World War II to honour the British Royal Air Force pilots who wore the Oyster watch during battle.

The first-ever Air King model was called the Reference 4925, which is now extremely difficult to find. It was then followed by a series of other models including the Reference 4499. In terms of design, the vintage Rolex Air Kings didn’t have anything to distinguish themselves. These models were very similar to the other Rolex watches in the Oyster collection. To demonstrate, they had manual-wind Hunter movements, cream dials, and Arabic numeral hour markers.

However, it started to earn its own identity when the Reference 6652 was released in 1953. This model introduced the creamy silver dial along with the stick hour markers. The latter became an iconic detail, which the succeeding models will be known for.

Finally, in 1957, Rolex introduced the Reference 5500, the model that would define the whole Air King line for the next few decades. It came in a small 34mm stainless steel case with an Oyster bracelet.

On the dial, it looks a lot like the Reference 6652. It features the same creamy silver dial and the stick markers. The difference is that it bears the crown logo of Rolex on the 12 o’clock position instead of the usual stick marker.

Under the hood, the watch runs on either the 1520 or 1530 movement. But unfortunately, the Air King Reference 5500 was never chronometer certified. Consequently, the vintage models do not have the text “superlative chronometer-certified” on their dials. Instead, it bears the texts “precision” if it contains the Cal. 1520 or “super precision” if it contains the Cal. 1530.

In 1989, Rolex released an update on the Air King called the Reference 14000. In terms of design, the updated model had Arabic numerals at the 3, 6, and 9 o’clock position. However, they also released a version that has only the stick markers. Surprisingly, the version with the Arabic numerals became more popular to the consumers.

Apart from design, the Reference 14000 also had an upgrade when it comes to performance. It was powered by the new Calibre 3000 movement and had a sapphire crystal to make the dial more durable.

However, in 2000, Rolex upgraded the Reference 14000 with the calibre 3130 movement. The new movement is COSC certified and has an accuracy rating of +2/-2 seconds per day. To add, the movement is also shock-proof as it has Kif shock absorbers. 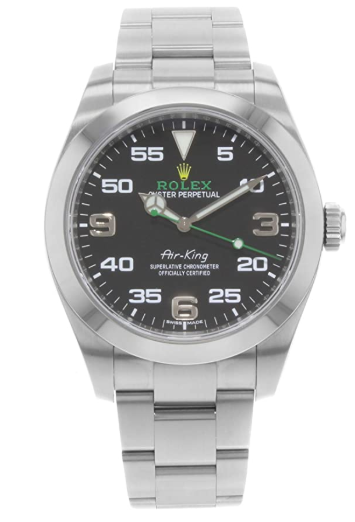 In 2014, Rolex discontinued the Air King, which dismayed a lot of the fans. But the good news is that Rolex didn’t give us much time to miss it. Because in 2016, they introduced an all-new Rolex Air King Reference 116900.

At first glance, it is obvious that Rolex decided to say goodbye to its vintage aesthetic. Indeed, the new model Let’s take a look at what upgrades this model boasts.

During its decades-long run, the Rolex Air King is known for producing models with corporate-stamped dials. A few brands that have their logos printed on the Air King are Domino’s Pizza, Tiffany & Co., and Circle Bar Drilling Company. Some of these versions are considered as collector’s items and can fetch a huge amount of money when sold.

Enough of its history. Let’s now take a good look at how the new Rolex Air King holds up. Here are a few things that you should know about the watch. 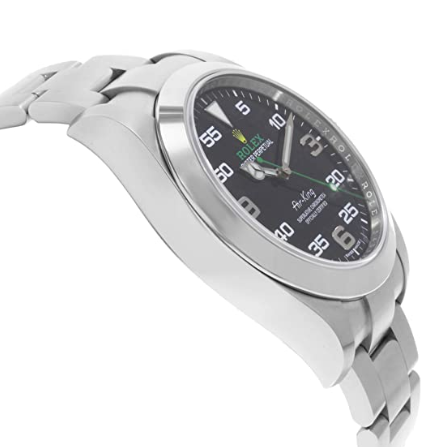 Unlike the vintage models, the new breed of Air Kings comes in a bigger 40mm case. This is to catch up with modern trends as watches were typically smaller a few decades back. Moreover, the case is made of Oystersteel. In fact, the case is exactly the same as the Milgauss Reference 116400.

With that said, it also shares the Milgauss’ ability to resist magnetic fields. Its case contains a soft iron inner cage that protects the movement from magnets. This is the reason why a lot of people are fond of calling it the Milgauss’ twin.

On the downside, the extra protection inside makes the watch thicker than the average timepiece. In particular, its measurement clocks in at 13mm. But the good news is that when worn on the wrist, the Rolex Air King still feels comfortable and does not feel bulky at all.

In spite of its time-only function, the Rolex Air King Reference 116900 has a lot on its dial. However, this does not mean that the watch is difficult to read. The most obvious elements on the dial are the extra-large Arabic numerals. Additionally, the 3, 6, and 9 o’clock markers are even larger than the rest. Meanwhile, the 12 o’clock is an inverted triangle for added legibility.

Furthermore, this watch features Mercedes style hands. Meanwhile, the seconds hand comes in a bright green hue that mimics the brand’s colour, or what people are fond of calling “Rolex green”.

A lot of fans have also noticed its similarities with the Rolex Explorer. In fact, the two models would be identical if not for one difference. While the Rolex Air King features Arabic numerals, the Explorer uses baton markers.

Apart from that, the dial of the Air King also resembles an instrument panel of the Bloodhound SSC. It is a supersonic car powered by jet and rocket engines that Rolex designed a dashboard for. It’s anyone’s guess if Rolex actually used the car’s dashboard as an inspiration for the Air King’s dial.

As seen in the picture, the Rolex Air King Reference 116900 uses an Oyster bracelet. And as expected of Rolex, the bracelet is smooth, durable, and very comfortable to wear. Despite the watch’s heft, the bracelet gives your wrist an even distribution of weight to still make it comfortable on the wrist.

The Rolex Air King Reference 116900’s similarities with the Milgauss doesn’t stop with the aesthetics. In fact, both watches even share the same movement called the calibre 3131. Obviously, the movement is protected by a Faraday cage to improve its magnetic resistance rating.

Apart from that, the movement makes use of a paramagnetic blue Parachrom hairspring, nickel phosphorus lever, and an escape wheel for extra protection. The only downside to this extra protection is that it contributed to the watch’s thickness.

Furthermore, the calibre is automatic and has a power reserve of 48 hours. And you would be delighted to know that it meets Rolex’s updated superlative chronometer. That means that its accuracy rating falls within -2/+2 seconds of deviation per day. Apart from that, it also comes with a 5-year warranty. It guarantees that Rolex will fix your watch free of charge if it doesn’t perform  -2/+2 seconds per day.

Who Should Get the Rolex Air King?

With its relatively low price point, the Rolex Air King makes an excellent entry point to the world of Rolex. Sure, it’s not as flashy as a gold Day Date. Nor does it have a back story as interesting as the Sub. However, one thing’s for sure — the Rolex Air King does the job.

So if you’re new to luxury watches or if you’re unsure whether Rolex is right for you, you should definitely consider this model.

But that doesn’t mean it’s only good for newbies. In fact, this watch is also ideal for people who are genuinely into its design. It can also be a cheaper alternative to the Explorer, Milgauss, or even the Oyster Perpetual 39 due to its similarities in design.

Without a doubt, the Rolex Air King provides a big bang for your buck. In spite of its lower price tag, it sure doesn’t lag behind in terms of performance. In fact, it offers a lot of the features that the other Rolexes offer. But with less damage to your wallet.

For one, it offers antimagnetic properties like the Rolex Milgauss. Apart from that, it has a reliable movement that is certified as a superlative chronometer.

And you know what the best part is? You don’t have to search high and low or spend months on the waitlist just to find one at a fair price.

In the mood for more bang-for-your-buck timepieces? Check out the Hamilton Khaki Field Mechanical! 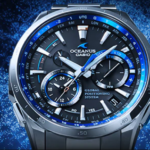