It is not out of the ordinary for fans to associate watches with their favourite personalities. A few good examples are Paul Newman’s Daytona, Nina Rindt’s Universal Geneve, and of course, Arnold Schwarzenegger’s Seiko Arnie.

For this article, we’ll focus on the last one, which is often referred to as “the celebrity watch” due to its exposure in a lot of action films. In fact, it plays the role very well, thanks to its burly aesthetics. Read on to find out what makes it so special.

While the modern Seiko Arnie debuted in 2019 during Baselworld, its history dates a few decades back. In fact, it is a reissue of a fan favourite called the Seiko H558, which was introduced in 1982.

The watch is historically significant because it is the world’s first hybrid diver. To explain, it has both analogue and digital displays. Apart from that, it has an alarm and a chronograph.

Undoubtedly, the Seiko H558’s features are enough to garner attention. Being the first hybrid diver in the world is no easy feat. However, this breakthrough is often overshadowed by another event whenever this watch is being introduced.

Now, the Seiko H558 is popularly known as the “celebrity watch”. And in my opinion, it deserves every bit of the status as it appeared in a lot of Hollywood movies. Case in point, the H558 was James Bond’s choice in the 1985 movie called A View To A Kill.

But the watch reached the peak of its popularity when bodybuilder-slash-actor Arnold Schwarzenegger wore it in some of his movies. In particular, the watch can be seen in Commando (1985), Raw Deal (1986), Predator (1987), and The Running Man (1987). Take note that some of the H558 that Schwarzenegger wore in the films were modified to suit the script.

No doubt that Schwarzenneger was extremely popular during the late ’80s and early ’90s so it is to no surprise that his fans noticed every single item of clothing that he wore. Consequently, the popularity of his watch skyrocketed up to the point that it became a cult classic. Spoiler alert — years after this, the reissue of the H558 will be called Seiko Arnie in honour of the movie star.

It’s been a while since Schwarzenegger’s rise to stardom, and fans think that it’s time for the Seiko H558 to be revived. This time, it’s under the name of Seiko Arnie. So in 2019, Seiko revealed a faithful reissue of the cult classic as an answer to fans’ prayers.

To a lot of people’s delight, the Japanese brand did not only reveal one but three models — the SNJ025, SNJ027, and SNJ028. These models stayed true to the original look and feel of the H558. But when it comes to the components and technology inside, Seiko gave the watch a big upgrade.

Before taking a closer look at the 2019 Seiko Arnie, here are its specs:

If you’re thinking that the Seiko Arnie has an average size, you guessed wrong. In fact, it carries a whopping 47.8mm case from the original 45mm. With that number, you’d be hard-pressed to find anything bigger. On the big screen, the Seiko Arnie looks just right. But remember that Arnold Schwarzenneger is a very muscular man so the watch looked small compared to him.

In spite of its bulky size, the Seiko Arnie is not as heavy as it looks. This makes the watch comfortable to wear for long periods of time.

Given this point, the Seiko Arnie might not fit people with slim wrists. But if you really like the watch, there’s no stopping you from wearing it. Anyway, I think the oversized watch trend is not going anywhere for a while.

When it comes to the design of the dial, the Seiko Arnie looks a lot like its predecessor. In fact, one of the few distinguishing elements is the text that says “Solar” and the Prospex X logo just above the 6 o’clock position. Apart from that, the “diver’s” text on the new iteration comes in a bright red colour while it comes in yellow in the 1980’s model.

Another subtle difference between the two models is the chapter ring. While the new one has a 24-hour chapter ring, the older version has a depth metre. Depending on your needs, the change can be seen both as an upgrade or a downgrade. If you’re a diver, you might prefer the depth metre since it is a chart that tells the wearer how much time they have left in order to surface from a depth of 50m.

On the other hand, those who do not intend on diving with the watch will appreciate the 24-hour chapter ring. Indeed, it has more practical uses for everyday life. To explain, the 24-hour tracker displays the 24-hour military time so it’s useful for people who often lose track of day and night.

Perhaps the biggest upgrade of this model from the original one is the movement that makes the watch tick. To explain, the original model uses a quartz calibre whereas the reissue uses Seiko’s very own solar-powered movement called the H851. In other words, all you have to do to power the watch is to expose it to sunlight. Once it is fully charged, the watch can run for up to six months. With this watch, there’s no need to go through the hassle of buying and changing batteries.

Moreover, the H851 is called a Duo-Display movement as it tells the time in both analogue and digital displays.

See that little digital screen on top of the dial? That screen will provide you with features that you might find handy in your everyday life. By default, it shows the digital display of the time that is in sync with the analogue display. But pushing the button at the left side of the case will give you a calendar, second time zone, a chronograph, and an alarm.

The sweet thing is, these functions are all easy to use and understand. Aside from being user-friendly, the digital screen is also legible and has a decent supply of lume so you can still read it in the dark.

To spice things up, Seiko decided to release the Arnie in three different flavours. They are the SNJ025, SNJ027, and SNJ028. Read on to know which colourway is right for you. 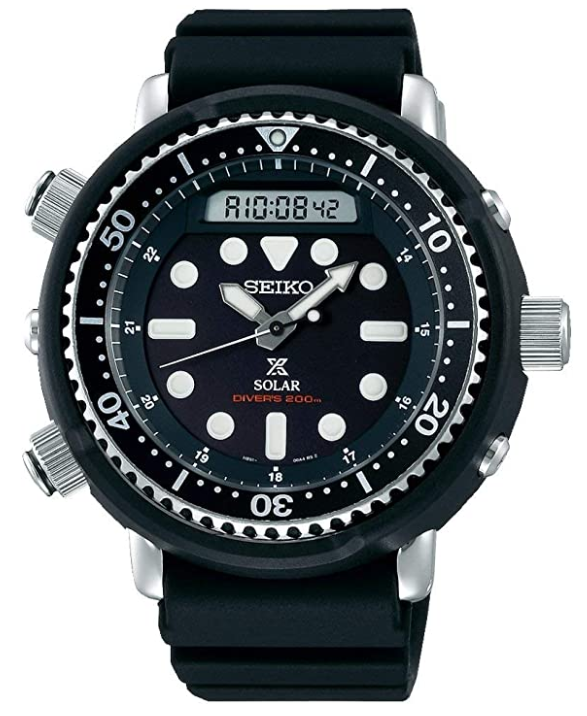 If you like keeping things simple, then check out the Seiko Arnie SNJ025. You’d be delighted to hear that it boasts the classic all-black colourway. It also stays true to the original Seiko Arnie that Arnold used.

With that said, this model comes in a black bezel, bracelet, and dial. Only the hour markers and the tracker on the bezel come in white to make the dial legible. 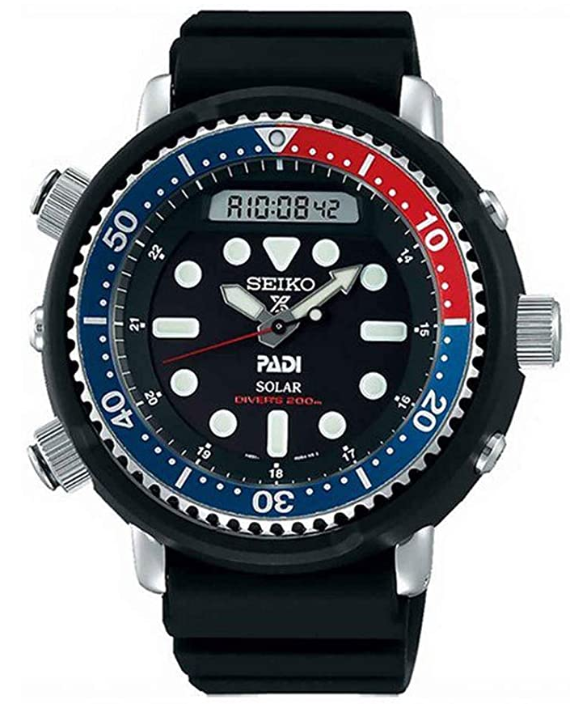 The Seiko Arnie SNJ027 is the most colourful among the bunch as it features the familiar Pepsi colourway. If you’re familiar with the SKX009, then this one looks similar. Like the other model, its strap, case, and dial all retain the matte black hue. But the magic happens in the dial.

To explain, the first quarter of its diving bezel comes in bright red. While the rest is in blue, similar to the shade that you’ll get from a can of Pepsi.

Another thing to separate this model from the two others is the PADI logo on the dial. This means the watch was made in partnership with the Professional Association of Diving Instructors. With that said, this extra bonus earns you more bragging rights, especially to your diver friends.

In my opinion, this model of the Seiko Arnie is best for people who want a pop of colour on their watch. The blue and red colour combination makes a good contrast against the matte black. 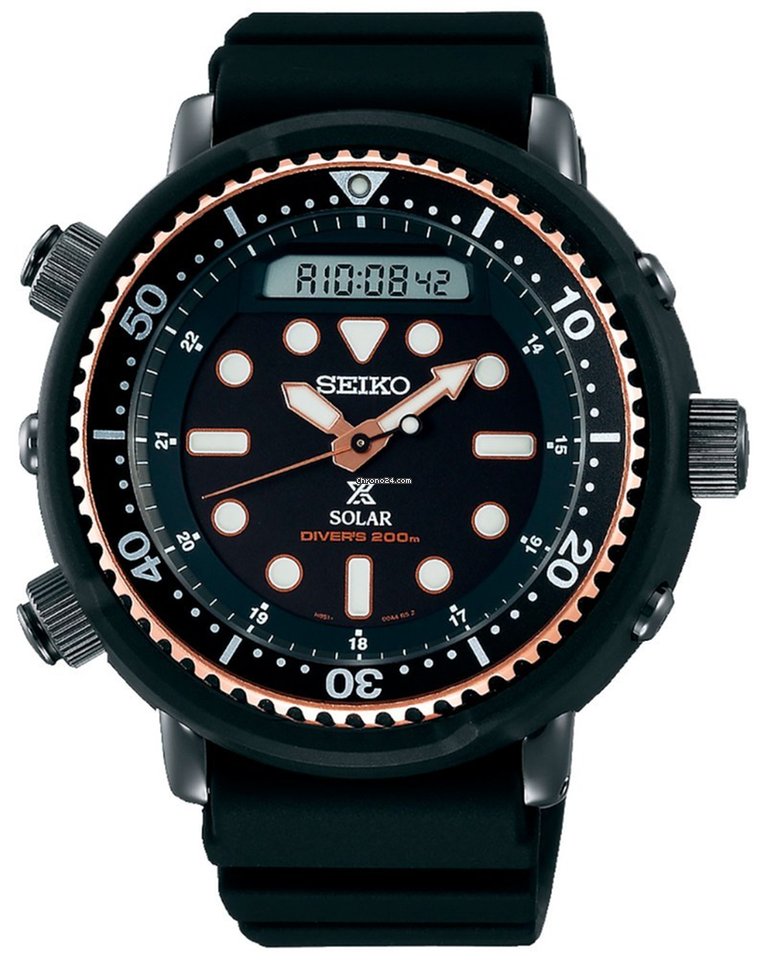 From afar, the Seiko Arnie SNJ028 looks a lot like the SNJ025. Indeed, they both share the same black bezel, dial, and strap. But if you look closely, there is a very subtle detail that sets this model apart.

Instead of just having a black and white colour scheme, it also has a few rose gold accents. With that said, the side of its bezel, the hour markers, and the hands are all DLC coated. However, Seiko managed to keep the gilt highlights toned down. So if you’re looking at it from a few feet away, the watch would look exactly like the SNJ025.

To conclude, this watch is perfect for those who want subtle bling on their wrists without drawing too much attention.

Pros and Cons of the Seiko Arnie

There’s no doubt that the Seiko Arnie has already achieved legendary status. It has become a cult classic and the history of Seiko will not be complete without it. With that said, this is a must-have for die-hard Seiko and/or Arnold Schwarzenegger fans.

As mentioned above, the Seiko Arnie has a number of high-tech features that you won’t see from other watches in its price range. Apart from that, it is equipped with an upgraded movement that offers the wearer much convenience. With that said, this watch has everything you need and more.

Fortunately, the price tag of the Seiko Arnie is not as big as its features. For less than $500, you get useful tools like the dual time zone, solar-powered movement, and the chronograph. Not to mention, this is an iconic watch that we’re talking about.

It’s a given that dive watches come in large sizes, but this timepiece takes it to the next level. In fact, the Seiko Arnie is one of the largest dive watches around. At almost 48mm case size, this big timekeeper might not fit a lot of wrists, especially those who are slim.

Unfortunately, it doesn’t come in a smaller variant. And if you’re hoping that the old version is significantly smaller, there’s no luck there too. In particular, the vintage model is only smaller by 2mm.

But who knows? If Seiko Arnie fans from all over the world wished hard enough for a smaller version of the iconic watch, then maybe they’ll consider releasing one. After all, Seiko is known for listening to the requests of their customers.

Who is the Seiko Arnie for?

I would be lying if I said that the Seiko Arnie is for everyone. Just like the other Seiko dive watches, the Seiko Arnie appeals to a certain niche. In fact, it belongs to a very specific type of audience. It may not have a versatile design nor a classy look. But when put in the hands of the right people, this beast can bring a lot of fun and excitement.

And when I say “the right people”, I mean the people who are into rugged tool watches that were made to survive a beating like what Arnold went through in his movies. It is also for people who love the history and personality connected to the timepiece.

To conclude, the Seiko Arnie, like its namesake, is nothing short of a badass. While it may not be for everyone, there is no denying that the watch deserves a spot in Seiko’s hall of fame. Furthermore, the 2019 Seiko Arnie reissue does a good job of continuing the legacy that the original model started.

Looking for something similar to the Seiko Arnie? Check out our guide on the Seiko Tuna!

Hamilton Khaki Field Mechanical: A Guide to the Historical Timepiece 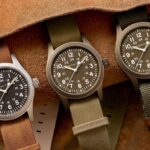 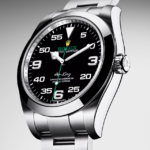