Some watches are made to complement a wardrobe; others are made to stand out. No doubt, Hamilton Ventura belongs to the second category. Just one glance at the watch and you can tell it’s not meant to blend in — it is made to take centre stage.

Its shape, for instance, is unique in the world of watch design. But it’s not only its design that makes it different from the rest. People fondly call it “the watch of the future”. You wanna know why? Read on and find out.

The origins of the Hamilton Ventura date back to a time when the world was recovering from the war. It was when Rock & Roll culture prospered and the youth experimented with different styles — leather jackets, mohawks, etc. And this culture greatly influenced the design of products, including watches.

The person to thank for the Ventura’s out-of-this-world design was Richard Arbib. As the story goes, Hamilton hit him up to ask for a new watch design. They gave him full freedom to do whatever he wanted. Yes, he didn’t need to think about the watch’s practicality and other things. Thus, the product became an icon that is well-regarded up to this day.

When Hamilton introduced the Ventura at a New York press conference in 1957, people did not know how to describe it. Was it an inverted letter “D”? Was it a shield? Or perhaps a boomerang? No one exactly knew, but one thing was for sure — it’s not like any other watch.

Apart from its futuristic-looking design, the Hamilton Ventura excelled in other things. In fact, it is considered as the world’s first electric watch. This innovation was a product of a decade of research and experimentation. And it tilted the course of watchmaking history.

Before 1957, all of the watches were powered by a mainspring. It was done either through manual hand-winding or kinetic energy (wrist motion). But the Hamilton Ventura went a different route. Rather than winding the crown, the watch gets its power from a battery.

However, the watch wasn’t fully electric. A big part of the watch’s operation was still mechanical. In other words, it didn’t consist of transistors or other electronic components. Despite that, it gave a jumpstart to the modern battery-powered quartz revolution.

When Hamilton released the Ventura in 1957, it wasn’t smooth sailing at first. Competitor watchmakers Elgin and Bulova were also trying to make an electric watch. Thus, the pressure to be the first one to produce it was intense.

To make matters worse, Elgin started teasing the market with their own version of an electronic watch in 1952. However, the final product wasn’t released until 1961 and unfortunately for them, it was a flop. Eventually, the brand decided to discontinue the product.

Because of their desire to finish as No. 1, Hamilton overlooked a few details about the watch. Firstly, the movement that they released to the market was still a prototype. Secondly, they failed to train watchmakers in servicing the new movement. It was an important step as the technology was new.

This blunder caused a lot of watchmakers to be frustrated with the movement. It even sparked a rumour that the watches did not work. Luckily, Hamilton was able to bounce back and released an improved calibre called the 505.

The Filmography of the Hamilton Ventura

Apart from its technological feat, the Ventura is also known for starring in various Hollywood films. Below is its filmography.

Some people would argue that the Ventura became popular because of Blue Hawaii. In this 1961 comedy, Elvis Presley was seen wearing the odd-shaped watch. The singer-actor fell in love with the watch’s design and started wearing it even off-screen.

Because of the association of the watch with Elvis, Hamilton decided to make a limited edition in his honour. They called it the Elvis and released it during his 80th birthday.

The Ventura has always been a staple in the Men In Black franchise. In the first instalment, Agents J and K wore the classic Hamilton Ventura Quartz. Then in 2002, the Ventura Chrono Quartz stole the stage in Men In Black II. Finally, the Ventura XXL was introduced in the third Men In Black movie.

In this blockbuster film, we were introduced to a different breed of Ventura. The odd-shaped watch on Tony Stark’s wrist was familiar. Yet, something was different about it.

It turns out that Hamilton created a special-edition watch. It comes with a skeleton dial with design cues inspired by the movie. Some people would say this is the most avant-garde model in the lineup.

Different Versions of the Hamilton Ventura

Although these watches have their own quirks and personalities, they still carry the main design that made the Ventura popular. 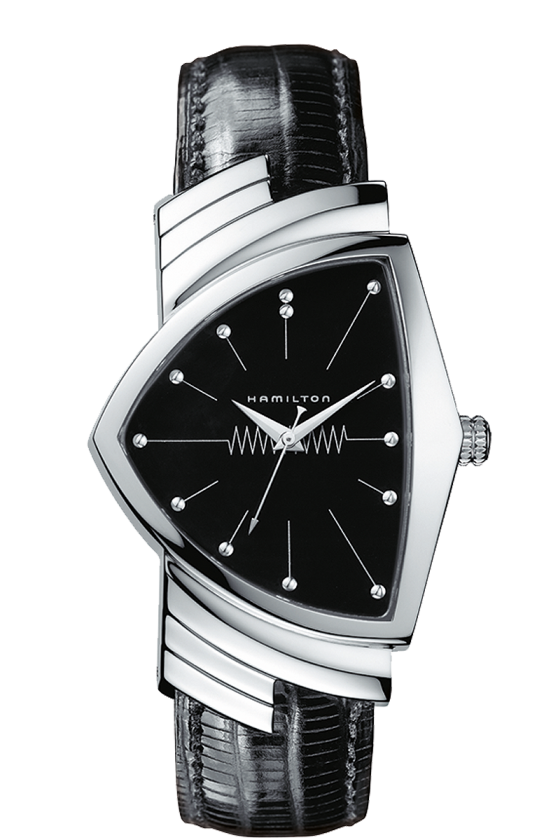 The Ventura Quartz is the closest thing to the original Ventura that was launched in 1957. In fact, it is the most recent iteration of the line. It bears the same shield-shaped case and patterns on the dial.

In terms of design, it comes in a size that falls in the middle. Not too big, not too small. This makes it versatile enough to fit various wrists. In addition, its colour scheme is dominantly black. The dial along with the leather strap will blend in with different outfits. 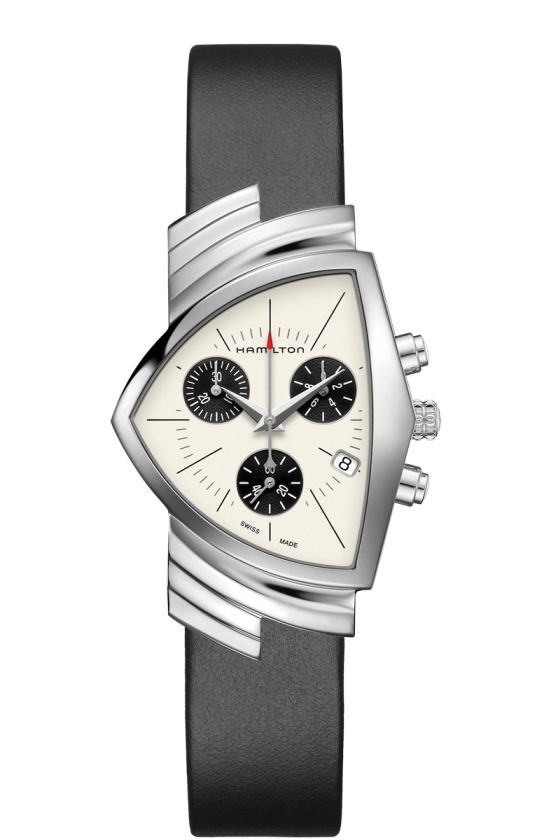 Most versions of the Ventura watches come with a time-only function. Meanwhile, others have an added date complication. But the Ventura Chrono Quartz comes with a very useful complication — the chronograph.

Like other chronograph watches, this one comes with three sub-dials for time measurement. These sub-dials are black. A perfect choice because it contrasts well against the off-white background. This gives the watch a similar appearance to the famous “panda dials”.

This watch is perfect for people who want the iconic watch but need the chronograph function. 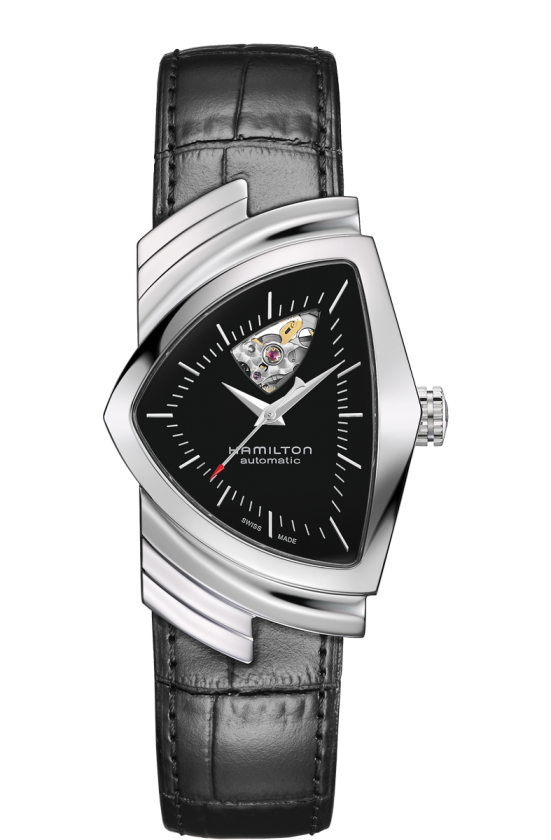 The Ventura is originally known for being the first electric watch. However, the demand for an automatic version of the model cannot be ignored. Thus, Hamilton decided to release the Ventura Open Heart Auto.

In addition to the mechanical movement, the designers also put a clear window on the dial’s 12 o’clock position. This is to allow wearers to admire the H-10 calibre inside.

The H-10 calibre is a three-hand movement that features intricate snail and pearled patterns. Apart from that, it also boasts a power reserve of 80 hours. That’s double the power reserve of an average automatic watch. 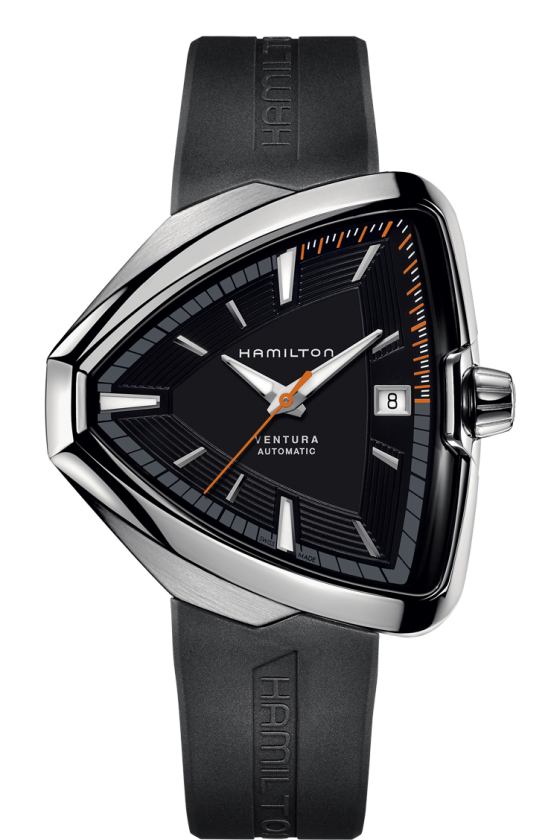 Although the Hamilton Ventura Elvis 80 Auto follows the same shield-shaped case, it has a distinct personality. If you would look closely, this version’s dial looks more modern. It even gives us the impression that it belongs to a race car’s cockpit.

Historically, this watch was originally made to celebrate what should have been Elvis Presley’s 80th birthday. This is to honour The King’s contribution in popularising the watch when he wore it in the 1961 film Blue Hawaii.

This watch comes in a slightly larger case of 44.6mm. And if you look at the dial, it has orange accents that mark out the minutes between 12 and 3 o’clock. This colour harmonises well with the orange seconds hand.

In terms of performance, it uses Hamilton’s trusty H-10 calibre. Another interesting thing is that its power reserve is 80 hours. Whether Hamilton intentionally chose the number to coincide with Elvis’ 80th birthday is anyone’s guess. 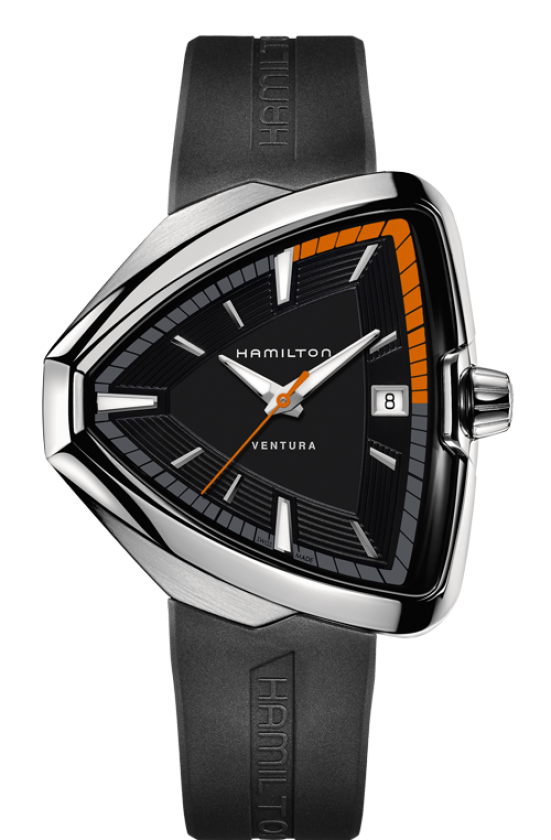 Like the previous watch, the Elvis 80 Quartz was also made as a tribute to its namesake. But what’s different about this watch is the movement. Instead of a mechanical one, this version is battery-powered.

At 44.6mm, this watch is considered large. It has the same catchy orange accents at the top right of the dial. Meanwhile, gray markers surround the dial from 3 o’clock until 12 o’clock.

To give the watch a sporty vibe, it comes in a black rubber strap. However, if rubber is not your thing, you can change it into a metal or leather one. 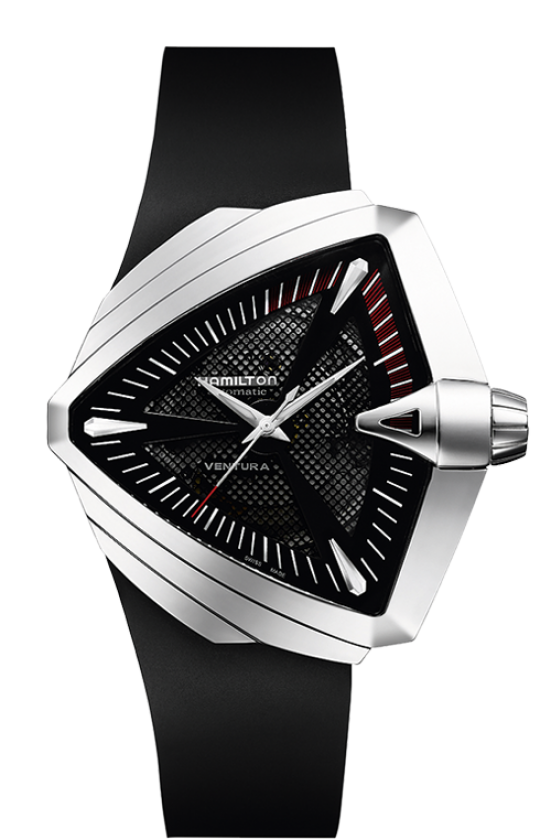 A believer of ‘go big or go home’? Then the Ventura XXL Auto is for you. At 46mm, it is obviously made for people with big and muscular wrists. Additionally, it is the largest model in the collection.

Like the other Ventura models, this one uses the H-10 calibre. It is a three-hand movement without a date complication and can power the watch up to 80 hours.

In terms of design, this model has a few variations. Firstly, the dial has a subtle honeycomb grill pattern. Apart from that, the top right corner of the dial is decorated with dark red accents for a pop of colour.

Another thing about this watch is that it is the model worn by the characters in Men in Black. In fact, some fans started calling it “the timepiece of the galaxy”. If that doesn’t make you sprint to a nearby Hamilton boutique right now, I don’t know what will. 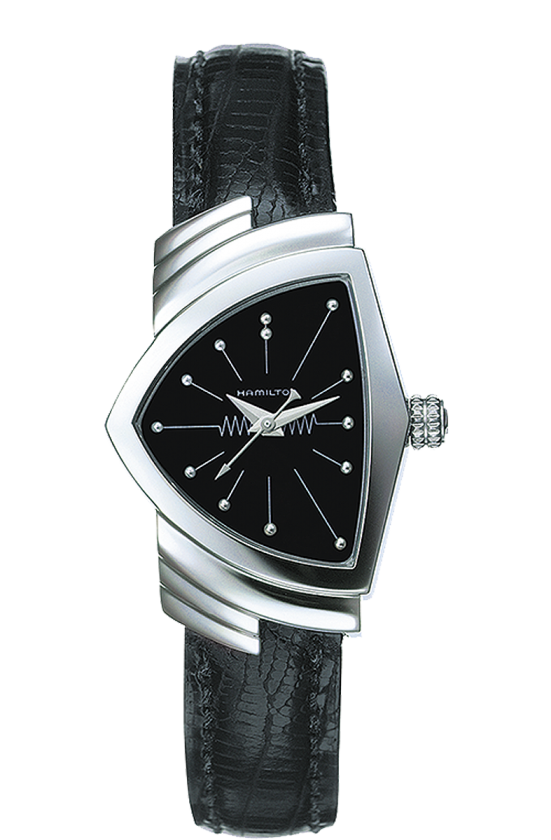 While the previous watch is extra-large, the Ventura S Quartz is the smallest of the bunch. At only 24mm, this model is smaller than the average watch.

When it comes to design, it is indistinguishable from the original Ventura. It bears the elegant black dial with the zig-zag pattern in the middle. Apart from that, it comes in a black leather strap to keep things classy.

Inside, this timepiece uses the F03.101 calibre. As mentioned, it is battery-powered and is one of the trusted calibres around. 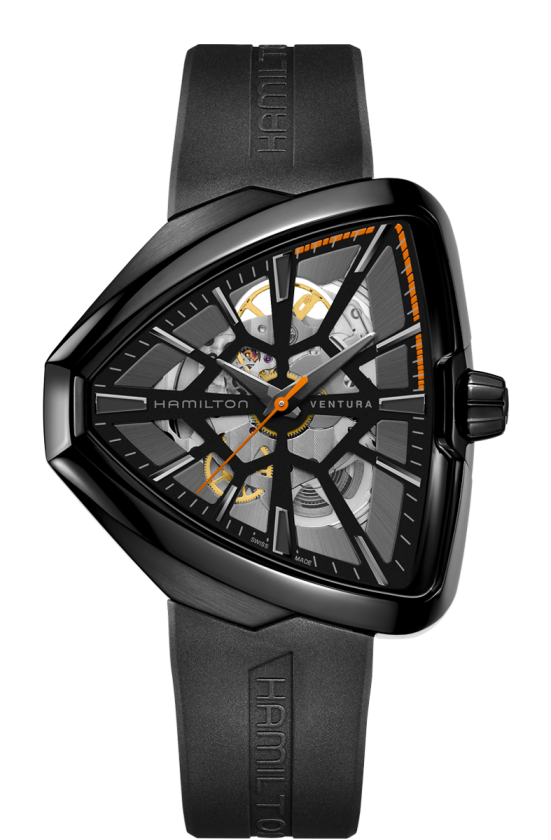 Perhaps the Ventura Skeleton Auto Limited Edition is the newest Ventura in Hollywood. In case you didn’t notice, this watch was seen on the wrist of Tony Stark A.K.A. Iron Man in the movie Spiderman: Homecoming.

To celebrate its cinematic debut, the watch features an intricate spider web-inspired skeletonised dial. Aside from the reference to the movie, it can also double as a window where one can admire the movement inside. 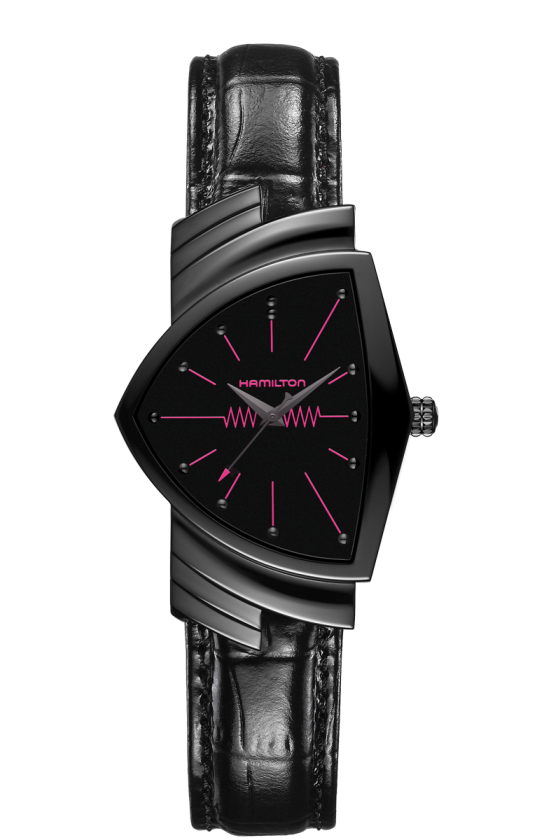 What happens when Hamilton collaborates with Japanese style guru Poggytheman? You get an elegant watch called the Ventura Poggytheman!

This version comes in an almost all-black colour scheme. The leather strap, case, hands, and dial are all black. But to spice it up, the indexes and the pattern on the dial are in pink.

If you flip the watch over, you’d be surprised to see that the backside of the leather strap is pink. But that’s not all. The caseback is engraved with a portrait of the fashion icon. This watch is guaranteed to be the envy of fashionistas around the globe.

Some people may or may not like the unique shape of the Hamilton Ventura. However, you cannot discount the fact that it is one of the most iconic and recognisable watches in the world. With that said, owning a Hamilton Ventura is like owning a piece of history.

A Lowdown on the Elegant Omega De Ville Collection 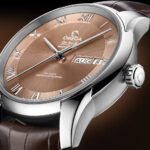 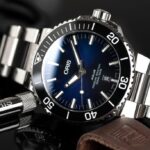 14 Versatile Oris Aquis Dive Watches For Your Next Expedition