The 1950s saw the release of some of the most iconic watches revered today, including the Hamilton Ventura, Rolex Submariner, as well as the Omega Seamaster. These dive watches surely made their mark on the industry, especially that they’re from well-known brands. When these brands release a new model, it would almost instantly be an icon for the right reasons. More than just the name they bear, these timepieces also led innovations left and right.

However, for a relatively then-unrecognised designer Gerald Genta, the Universal Genève Polerouter became one of the 1950s most iconic timepieces. We dare say it surpassed the heights the Submariner and Seamaster reached for more reasons than one.

There’s a lot to unpack when it comes to this iconic watch’s history. Not only do we have to trace a partnership between institutions but also get to know its designer. The legacy of Universal Genève Polerouter relies heavily on its roots as well as its design. To better understand how much this watch particularly impacted the industry, we shall get to know the notable watch designer Gerald Genta.

Who is Gerald Genta?

As a visionary pioneer, Gerald Genta was, without doubt, a legendary designer in the watchmaking industry. Each design crafted by Genta evidently reveres in his vision and savoir-faire. With technology as well as creative prowess as a weapon, his creations overall became pragmatic in their own right. Despite his passing, every generation experiences refined and advancing standards through his works. Known as the “Picasso of watchmaking”, Gerald Genta is a name that is recognised both by watch enthusiasts and the general public. To this day, his designs continue to inspire generations after generations.

Genta worked with big watch brands during his lifetime. Brands such as Patek Philippe, Audemars Piguet, and IWC trusted him with their representative timepieces. Indeed, Genta is the name behind the Nautilus, Royal Oak, and the Ingenieur SL. These designs, however, aren’t the only watches under his name.

To jumpstart his career, Genta underwent jewellery and goldsmith training in order to master the craft. This eventually earned himself a Swiss federal diploma. Soon after, renowned watchmaking manufacturer Universal Genève hired Genta. To say the least, his journey toward recognition began with Universal Genève.

The creation of the Universal Genève Polerouter traces almost a decade before its release. In the late 1940s, three Scandinavian airlines established the Overseas Scandinavian Airlines System or OSAS. The airlines included Danish airline Det Danske Luftfartselskab, Norwegian airline Den Norske Luftfartselskap, as well as Svensk Interkontinental Lufttrafik AB from Sweden. This was, of course, later shortened to Scandanavian Airlines Systems or SAS. This institution boasts a ton of firsts in aeronautics history.

One of the most momentous feats SAS achieved was the establishment of the transpolar route. In 1952, the DC-6B “Arild Viking” took off from Los Angeles to Copenhagen. This marked the first trans-arctic flight by an airline with a commercial aircraft. In addition, the flight took 28 hours. SAS, however, continued to change the aeronautics game by running a test flight between Norway and Alaska. This happened a year later in 1953. This significantly changed the game as SAS made the first flight over the North Pole which was once deemed impossible. In 1954, SAS finally opened their Copenhagen-Los Angeles flights. Achieved by flying Douglas DC-6Bs over the inhabited polar regions, the trip consequently made stops in Kangerlussuaq, Greenland and Winnipeg, Canda. This route effectively cut flight time from 36 hours down to 22 hours.

This accomplishment altogether altered more than just intercontinental air traffic but also tourism. Hollywood stars, as well as film industry professionals, flocked the flight resulting in an influx of tourists from the US to Europe. It also justified the increase of the transpolar flights from once to thrice per week.

The Challenges of Flying on Polar Routes

However groundbreaking the new route was, it still posed challenges. Especially concerning timekeeping, the polar route struggled with the issue of magnetism. There were a lot of changes required for the flight to be successful such as a whole new navigation system. Specially made to function despite the extreme magnetism on the polar route, it only solved one of the issues on the flight.

As important as the navigation system was to the flight, timekeeping just as well had to be accurate. Timing instruments completely overturned the way timing instruments worked on the flight. This included timepieces on pilots and crews, as well as passengers. To solve this, as the official and sole supplier of chronometer for SAS, Universal Genève researched and developed anti-magnetic watches.

Gerald Genta, only 23 years old then, designed and crafted the watch to meet the standards SAS required. Aptly named the Polarouter, the watch carried the SAS logo on the dial. It exclusively worked within the organisation. SAS later distributed the first Polarouters to all the crews of the inaugural flight upon arrival at LAX on November 15, 1954.

The watch was a dainty 34.5mm with bombé lugs. The dial featured a straightforward design with no date window. It also included a textured inner index ring. Inside, the watch was powered by a Calibre 138 SS bumper automatic movement. Renamed Universal Genève Polerouter the following year, this later became the standard building blocks for the future iterations of the model.

The Simplicity of the Universal Genève Polerouter

The Polerouter proved to be the epitome of simplicity from the 1950s. A lot of people revel on its understated design that was a straightforward response to an aeronautic issue. The bombé lugs definitely added definition to the watch. Compared to the Omega Speedmaster’s chunky exterior, the Universal Genève Polerouter proved to be stylish while remaining powerful. Spaced at 19mm apart, the lugs surely brought even greater personality to the watch without trying too hard.

Despite its graceful 35mm case, the watch established its dominance as more than just a dress watch. It greatly and effectively resisted magnetic interventions on the pillar routes the flights took. The brand immediately jumped on to create various models under the Polerouter line. Among the popular iterations include the Polerouter Date, Polerouter de Luxe, Polerouter Sub, Polerouter Compact, and Polerouter NS.

To amp up the luxurious feel on the watches, Universal Genève incorporated lush gold on some iterations. Among these models include the Polerouter de Luxe and the Polerouter Jet. These watches look fairly different from each other while maintaining the true Polerouter spirit. Both giving off an effortlessly posh vibe, they became a popular choice among the Polerouter watches.

The Polerouter de Luxe features a solid 18K gold tonneau-shaped case with the iconic Gerald Genta signature lugs. The caseback of this watch is also solid gold and screwed. The champagne dial makes a case for a monochromatic luxury protected by plexiglass. Also in gold, the dauphine hands add character to the watch. Other models found on the market today feature a black dial that beautifully contrasts the gold.

If too much gold isn’t for you, the Polerouter Jet gives just as much plush elegance with gold accents within its dial. The Jet features gold hour indexes as well as dotted minute markers. To further enhance the watch’s gold points, the dauphine hands are also in gold. The watch still includes a crosshair dial but in an understated silver that blends well on the dial.

Another popular Polerouter model, the Polerouter Sub includes two main versions. Contrary to its popularity, the dual crown Super Compressor is rare. The single crown model, on the other hand, has various dial-hand variations. They also differ in bezel materials and colours as well as crown shapes. With the bezel differences, there are flat aluminium bezels and one with an acrylic insert. The acrylic insert bezel features 3D hash marks, adding depth to the watch. A lot of watches with this bezel, however, have cracks due to its delicate nature. With this, aluminium bidirectional bezels grew more popular to collectors these days.

What Moves the Polerouter

As aforementioned, the earliest Universal Genève Polerouters and Polarouters featured a Calibre 138 SS bumper automatic movement. The same movement powered other SAS watches. However, in 1955, Universal Genève changed the watch’s movement to the Microtor Calibre 215. This would later be the first of micro-rotor movements alongside Hamilton/Buren’s “Planetary” rotor. However, even after its release in 1955, a legal discord between Universal Genève and Büren Watch Co SA kept the movement from being patented. In effect, the 215 movements had a “Patented Rights Pending” inscription underneath its rotor. To improve the 215’s fine adjustment, Universal Genève replaced the 215 with the Microtor Calibre 218. Most Polerouter Date watches had the 218-2 micro-rotor movement.

Looking for more ways to improve the microrotor movement, Universal Genève launched calibres 68 and 69 in 1962. Calibre 69 later mechanised the Polerouter Sub and Super. Among the improvements, the “stop oil” system proved the most notable. This chemical treatment blocked oils from shifting which subsequently reduces constancy of revamps. Moreover, these calibres included 55 hours of power reserve.

Inspired by the Polerouter

With its iconic design, the Polerouter attracted a lot of attention in the 1950s. Back then, the greatest competitor Universal Genève had was Rolex. The two always fought head to head against each other. But it seems as if Universal won the decade with the Polerouter. As the story goes, high-end Polerouters cost as much as a Volkswagen Beetle. But Rolex didn’t fall behind by coming up with paradigmatic watches as well with the Submariner in 1957.

Among the many watches inspired by the Polerouter includes Tudor Oyster Prince “Tuxedo”. Now, this would be an uncanny resemblance of the Polerouter with a crosshair dial design and textured indexes. It’s just as dainty with a 34mm case. The watch can be seen on the wrist of Mad Men’s Roger Sterling played by John Slattery. True to its name, the Tuxedo definitely evokes luxury without trying too hard. It’s also contrasted by the otherwise sporty look of Genta’s crosshair dial. The Philmaster from Philip Watches also takes inspiration from the Polerouter. This can be seen on the watch’s overall look, including its dial and hands. The indexes, while slightly different, are also textured with a domed crystal.

Polerouters have to be one of the most affordable vintage watches out there. While watches from the same era can cost up to five digits, the Polerouter sleeps from $1,000 to $2,000 more or less. It’s still a mystery why the watch’s price doesn’t blow up despite its popularity. However, it’s an advantage for many vintage watch collectors especially that it’s on the affordable side of the range.

As Gerald Genta’s first prominent work, the Universal Genève Polerouter surely has changed so much. It’s a lot more substantial despite its simplicity. It definitely deserves a lot more recognition than it should. For a watch that only costs so much today, it surely ruled a whole decade of horological innovations. Perhaps, the appeal of the watch goes far deeper than aesthetic but its history and affiliation to extraordinary events.

In a search for more vintage watches? Check out our guide on Dan Henry Watches!

Seiko SKX: A Guide to the Perfect Beater Watch 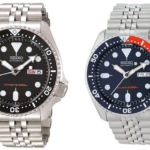 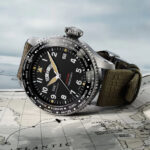