Chronoswiss, a post-Quartz crisis brand, thrived through the past years since its establishment. Despite being relatively new in the competition, Chronoswiss quickly became popular, especially to chronometer collectors. However, not everyone knows of the brand. So, what makes the brand well-loved among its niche clientele?

The Beginnings of Chronoswiss

The brand’s journey began in Munich, Germany, in 1983. The founder, Gerd-Rüdiger Lang, was a watchmaker at Heuer prior to the beginning of the company. However, he left just before Techniques d’Avant-Garde bought Heuer, therefore, becoming TAG Heuer. Easily, Lang had one specific mission in mind. He generally wanted to provide the world exclusive, mechanical watches in best Swiss-made quality. With this in mind, Lang together with his company crafted a world’s first. It was a mechanical chronograph with a moon phase monitor as well as a clear, crystal caseback. Soon after, Lang had the word “Chronoswiss” registered as a protected trademark.

This was only the beginning of a fruitful journey for the brand. In the late 1980s, the company launched The Régulateur. This world’s first serially manufactured wristwatch has a regulator-style display separating minutes, seconds and hours. The watch first appeared at Baselworld and significantly blew the crowd away. Back then, pre-atomic clocks such as marine chronometers and broadcasting timekeepers only used such formats. The Régulateur made it particularly possible to become portable.

Also born in the same era was the typical Chronoswiss case. It had a fluted bezel, onion-shaped crown, and patented screw-in solution for securely connecting the strap with the lugs. Soon after, in 1990, the Chronoswiss Régulateur Automatique premiered. The product was the brand’s first exclusive automatic movement.

An Era of Innovation

From then on, the company only continued to put out great innovations. Through the ’90s, Chronoswiss debuted various watches. Firstly, the Kairos Chronograph, distinguished by the off-centre display of the hours and minutes. Also launched in the ’90s is the Rattrapante with a patented split-seconds chronograph. They also launched the Cabrio, a reversible wristwatch with a unique patented top-hinged engineering solution. Chronoswiss also introduced the Orea watch, a serially manufactured watch that revived the art of hand-enamelled dials. Around the mid-1990s, the brand released the patented Grand Régulateur.

The ’90s continued to prove the brand’s unquestionably active releases. In addition to the many releases they produced in the early half of the decade, they launched the Opus. As a serially manufactured, automatic, skeletonised chronograph, it’s another first for the brand. The Pathos, on the other hand, is the world’s first skeletonised, self-winding, split-seconds chronograph.

At the beginning of a new millennium, the company debuts the Régulateur à Tourbillon. As another world’s first, it had a minute-repeater tourbillon with a regulator dial. It also has a cantilevered tourbillon cage.

The 2000s was the golden era for Chronoswiss. Aside from the many new patented firsts, the brand became well-known to award-giving bodies. Firstly, the Chronoscope — launched in the early 200s — won “Watch of the Year 2003” by the Armbanduhren Magazine. Additionally, the model won the “Golden Balance/International Watch Award” issued by Uhren-Magazin. In between these, Répetition à Quarts — the first Chronoswiss striking mechanism — debuted at Baselworld.

To further the brand’s many achievements in the 2000s, they also presented the Régulateur à Tourbillon Squelette at Baselworld. Another first for the world, the skeletonised regulator watch has a hand-engraved tourbillon. It only had 200 pieces, making it a coveted limited-edition timepiece. Furthermore, the brand brought home awards for the models Grand Régulateur, Imperia, and Répétition à Quarts. But the brand didn’t stop there. The Régulateur 24, Kairos Lady, Grand Lunar Chronograph and Opus won medals from international watch fairs as well as publications.

Moreover, in the most recent years, The Red Dot Design Award and the GQ Time Award awarded the Chronoswiss Flying Regulator Manufacture.

In 2012, the Swiss entrepreneurial Ebstein family acquired the assets of the company from Lang. This resulted in appointing Oliver Ebstein as the new CEO. The brand also opened a new atelier and headquarters in Lucerne, Switzerland, that’s open to the public. The new atelier welcomed visitors to witness the magic and science of the watchmaking process. They would also witness the dial-crafting artisans take hand guilloché and enamelling into the 21st century.

Furthermore, in 2020, Chronoswiss improved their capacities by allowing more and more processes done in-house. The atelier now handles finishing of movement parts, assembly, as well as artisanal techniques. The Atelier Lucerne expands by also taking care of the development, prototyping and aftersales service.

Among all these achievements and non-stop efforts to produce innovative timepieces, the brand holds on a few things that make them one of the best. While not a lot of people know about the brand, unlike other Swiss brands, Chronoswiss surely created a name big enough to thrive to this day. So, what exactly makes these watches so good? 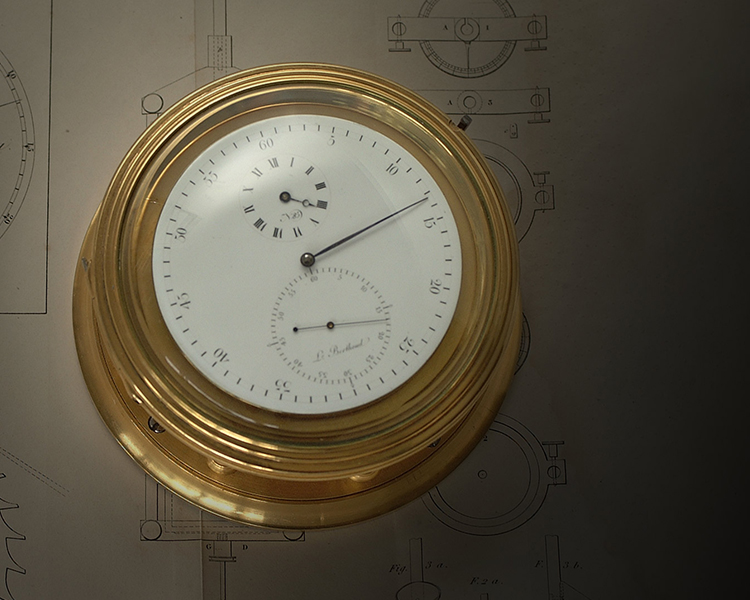 As aforementioned, Chronoswiss took the mechanisms of regulator clocks and made them portable. Back then, regulator clocks were the most precise clocks that a lot of professionals rely on. For instance, in the 1920s, the radio broadcasting industry used these watches. In the 1770s, explorers of the deep sea used regulators clocks as well. In 1987, Chronoswiss did what people thought was impossible. The brand accelerated the concept of a large central minute hand then separated hour and second indications. But how did they do this? The experts in the company took the regulator clock technology and made an extremely user-friendly, legible regulator watch.

As a brand that’s fairly new to the industry versus other Swiss brands, Chronoswiss started with modernity on its side. Not only did it start with horological know-how but also modern thinking and technology. The brand leveraged modern materials as well as artisanal mastery in making non-conformist designs come to life. According to the brand, they “don’t try to turn back time”. Instead, they married classical artisanal mastery with modern technology. To create the brand’s contemporary timepieces, they elevate what the industry already knows and design around it. Moreover, the brand utilises horological machines that made for the 21st century.

The great thing about its designs is its unique parts. There are certain parts of the watch that makes it unquestionably Chronoswiss. One of the strong design features has to be the fluted bezel present in most of its watches. The prominent onion crown also makes the watch an undeniable part of the brand’s aesthetic. Not to mention, the three-dimensional display and modern materials make the watches stand out even more. Moreover, the atelier-made watches feature guilloché and enamel dials. 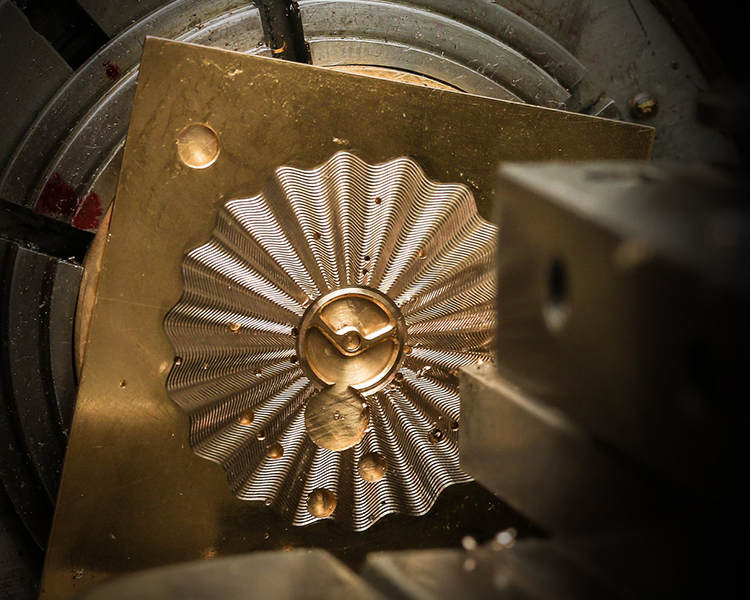 For more than 30 years, the brand had been using skeleton designs as a part of its aesthetic. A lot of their designs rely on this to further embrace the beauty and cultivate the appreciation of the inner workings of a timepiece. The brand highlights key points such as open-gear trains as well as maximising what to cut off. This process further allows us to see more parts of the mechanisms. Moreover, with contrasting materials, the skeleton would look more aesthetically pleasing to the wearer.

The brand incorporates artisanal aspects to its timepieces through guilloché and enamel. The depth guilloché dials make the watch undeniably three-dimensional. With steady hands as well as patterns from a machine almost a century old, every dial is unique. It elevates each dial with complex artistry. To further increase the lustre on the dial, the company’s experts use modern materials or grand feu enamel.

Alchemists do the job of sealing a watch dial with six to seven layers of clear or coloured glass powder. The process may require multiple attempts with its complexity. So, with a rigid quality check, the brand allows only perfectly smooth dials for release. But every bearer of a Chronoswiss doesn’t have to worry about the resistance of on each watch. By sealing a dial in a 1000°C oven, each watch will surely remain unscathed for years and years to come.

Best Chronoswiss Watches Worth Checking Out

Now that we know what makes Chronoswiss watches special, it’s time to check out their best watches. We’ve picked a few special watches that stand out from their many offerings. Not only do these watches embrace the brand’s core values but would also be a great addition to your collection. Moreover, we’re going to dive deep to the nitty-gritty details of each one.

The Chronoswiss Regulator Classic takes after the first watch that put the company on the map. After making changes to the regulator watch, the new Regulator Classic becomes sportier. The watch was also available in 41mm and 37mm sizes and various dial colours. Regulator watches feature the main hand as the minute hand. Meanwhile, it has two smaller hands for the hour and seconds. The Regulator Classic is the quintessential Chronoswiss watch with its aviation-inspired design incorporated with regulator clock mechanisms. The watch has a coined bezel and caseback as well as large onion-shaped crown, Not to mention, the large form of lugs make it look like an aviation watch. The watch, powered by the brand’s C. 295 calibre, functions at 4Hz with 42 hours of power reserve.

The watch is an entry-level model for the brand. It captures every basic aspect of what the brand is about. The design appeals more to those who like simpler designs. But other items on this list would make the brand just as competitive when it comes to intricate designs.

The Sirius Chronograph Moon Phase surely appeals to the lover of anything aesthetically pleasing. It features a genuine face and a guilloché decor on the dial to enhance its beauty. Encased in a 41mm steel case is the elegant chronograph, sitting at 15mm tall on the wrist. The watch has Breguet hour markers that add to its appeal. On the upper part of the dial is the chronograph 30-minute counter. Meanwhile, at 9 o’clock sits the running seconds and 12-hour chronograph counter at 6 o’clock. Then, at 3 o’clock, a 0 to 29.5 scale representing the length of a typical lunar cycle. Additionally, you can see its C.755 calibre with 46 hours of power reserve on the exhibition caseback.

This watch appeals to the lovers of classical design and admirers of innovative tech. It definitely gives off a luxurious feel without having to sacrifice accuracy and precision.

You’ll be confused at first glace at the Flying Grand Regulator Skeleton. This skeletonised version of the Flying Grand Regulator has a barely existent dial, making it a multidimensional regulator watch. Moreover, it has an elaborately constructed dial and deep insights available only in 30 limited pieces. Regulator watches are already very busy enough as they are, but and they may not be easy for people to use such a skeletonised version as reference. However, these watches may also appeal to a huge deal of collectors and enthusiast. To solve the earlier dilemma of most users, the watch uses contrasting colours to emphasise the vital information needed. In addition to its already stunning appeal, the watch’s sub-dials come in a funnel shape to add dimension to what it already has. Not to mention, its C.677S calibre operates at 18,800 vph with 46-hour power reserve.

Art and Science in Timepieces

Chronoswiss surely knows what exactly makes a great watch. With their designs revolving around regulator clocks, there’s no way you can get any of its watches wrong. If regulator watches are not your thing, you’ll want to steer away from it. However, the artistry on these timepieces definitely makes each a collector’s must-have. These watches will completely capture your attention with the details, especially with their complicated watches. For instance, their Open Gear watches. These watches would be such a sight to see.

Looking to buy a Swiss watch? Check out four reasons why you should get yourself a Swiss-made watch!

Baltic Aquascaphe Diver: Watch Out for this Potential Icon 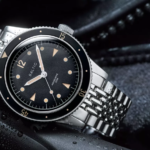 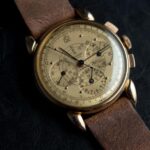 Universal Geneve: The Rise and Fall of a Watchmaking Giant