Cristiano Ronaldo is famous for his love of luxury watches. The Real Madrid star achieved another milestone after becoming the fourth player ever to score in four World Cups. While he’s an official brand ambassador for TAG Heuer, Ronaldo often wears lots of other high-end timepieces.

From Sporty To Splendidly Extravagant With Tag Heuer

A sports guy through and through, Cristiano often wears a sporty Aquaracer when he’s tooling around town — often on shopping sprees at the world’s most exclusive boutiques. But during his downtime, he puts on some other eye-popping timepieces. He’s posted enviable pics on Instagram that show him relaxing with his Carrera Mikrotourbillons.

Billed as the world’s fastest and most-accurate double tourbillon, the Mikotourbillons has tourbillons at eight and ten o’clock on its ebony dial — one for the chronograph and one for the watch. Sundials sit at the at three and six o’clock positions. To add a supple touch of luxury, the hand-sewn strap consists of soft black crocodile leather.

When he’s dressing to make a bold impression, Ronaldo has been known to wear a fashionable TAG Heuer Carrera Heuer-02T. The impeccable timepiece made specifically for the star has a black opaline dial, an 18-carat white-gold bezel, and 68 baguette diamonds.

With Millennials in mind, Ronaldo put out his own TAG Heuer sports watch under the banner “Don’t Crack Under Pressure.” The signature Formula 1 42mm Chronograph Ronaldo Special Edition has a sleek black titanium carbide case, black dial with green hands and a complementary black-and-green NATO strap.

Diamonds With Jacob And Company

One of the pricier timepieces Ronaldo has worn is the Jacob and Company Epic II. Valued at $130,000, his black and gold sports Epic II has a diamond weight of 15 carats with crystal sapphire faces front and back to show off the watch’s inner workings.

Crafted for durability, the water-resistant timepiece has a hard rubber bezel and dial made of black carbon fibre. But of course, the price tag is nothing compared to the Billionaire watch Jacob and Company debuted in 2015. With 260 carats of diamonds, that piece retails for $18 million.

Corums For Fashion And Fun

Speaking of diamonds, Ronaldo appeared on the cover of the Spanish sports paper MARCA wearing a Corum Admiral’s Cup Competition 48mm with 168 diamonds. Contrasting the gemstone-encrusted face, the timepiece has a soft brown crocodile leather strap.

Ronaldo also garnered attention when he wore a Corum while on vacation in St. Tropez, France. For that relaxed outing, he chose a sporty Admiral’s Cup Challenger with a red rubber strap.

Ronaldo and his teammates were given Hublot Big Bang Big Date Tourbillions when they snagged a win at the FIFA Best Awards ceremony in Zurich, Switzerland. Valued at around $11,000 each, the Big Bangs are calibrated to time two 45-minute halves of a soccer game. The Swiss timepieces have bi-retrograde self-winding modules in matt platinum cases with scratch-resistant sapphire glass crystals.

While paid to display TAG Heuers, Ronaldo is just as likely to sport a Rolex. Some of his go-to timepieces are elegant Rolex Cosmograph Daytonas. He has them in both rose gold and yellow gold. Debuting in 1963, the Daytona launched with pro racing drivers in mind, offering a precise chronograph and bezel with a tachymetric scale to gauge speed.

Ronaldo also regularly wears a yellow gold Sky-Dweller. Billed as a luxury travel watch, the timepiece has a 24-hour display that marks both the time in your current location and at home when you are in a different time zone. Cristiano is in esteemed company with the watch. Fellow traveller Jay-Z has been spotted sporting a yellow gold Sky-Dweller.

Joining with Swiss watchmaker Franck Muller, Ronaldo paid homage to the number seven that graced his jersey during his days with Manchester United. Together, they created seven limited-edition Perpetual Calendar Bi-Retro Chronograph watches. The rose gold Perpetual Calendar Bi-Retro Chrono CR7 has a dial with a diamond-studded seven and features an engraving of Ronaldo’s signature on the back casing.

Ronaldo not only wears Bulgari — he gives them out in bulk! The Portuguese soccer star famously gifted the entire Real Madrid team with luxury Bulgari Diagono watches. The high-end Italian timepieces retail for about $10,000 each.

Named for the Greek god of contests and struggle, Agon, Diagono embodies the spirit of competition with durable magnesium and PEEK cases and an elegant and sporty design. And Ronaldo being Ronaldo of course, he added a few special features. Each player had their name engraved on their watch along with “CR7” for Ronaldo’s name and special number.

If you enjoyed this article, then be sure to read Top 14 Hottest White Watches for Men and Women. 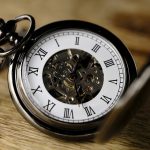 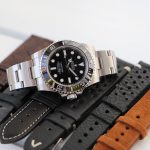 The 8 Most Popular Watch Brands in America